What is intelligent behaviour? How can computers recognize faces and objects? In this programme you will learn how to design and implement intelligent systems.

The core topics in the Master's programme Artificial Intelligence are: Computational Intelligence, Robotics and Multi-Agent Systems.

Automated translation between languages, face recognition, automated satellite image processing, or self-driving cars are all based on 'intelligent' computer algorithms. These algorithms are based on insights obtained in the cognitive and neurosciences on the one hand and are guided by fundamental principles of statistics, formal logic and dynamical systems theory on the other hand.

The courses taught in this specialization cover cornerstone topics of this interdisciplinary field, including machine learning, artificial neural networks and pattern recognition.

A robot taking samples and collecting information on the moon is an example of an autonomous system. It operates and carries out missions independently. Regardless of its surroundings, it responds with a certain intelligence. While traditional AI focuses on cognition and reasoning as isolated abilities, we strongly believe in perception as an active behaviour, which is integrated into general cognition.

The courses taught in the area of cognitive robotics are related to research in social/domestic robotics, human-robot interaction, and how robots can extend their knowledge over time by interacting with non-expert users.

Multi-Agent Systems
When a team of robots play football they have to communicate and cooperate with each other. This is an example of multiple agents acting concurrently; a multi-agent system. When designing these systems, techniques from computing science and logic are combined with knowledge about the interaction amongst humans and animals.

Exchange is possible, for example as part of your Master thesis. All our science and engineering programmes offer study abroad possibilities at a number of partner institutions. Our partners include top-100 universities in Europe (for example in Germany, UK, and Sweden) and in the USA, China, South-East Asia, and South America. Our exchange programmes have a typical duration of one semester and count toward your final degree.

The HTSM Honours Master is organized in cooperation with Philips and other major industry partners.

Do you prefer an early decision on your request of admission? Don't wait until 1 May, but use one of the earlier deadlines for this Master's programme (for a course start on 1 September).
If the University of Groningen has received your complete application before, then you will receive a decision at the latest on:

Information about admission possibilities and requirements for students from a Dutch HBO institute is published on: https://www.rug.nl/fse/msc-admission

Cover is the study association for bachelor and master students studying Artificial Intelligence, Computing Science or Human Machine Communication at the University of Groningen. We organise many events, all aimed at having a good time, improving upon your education skills and your future career. On our website you can check out our agenda to see upcoming events!
Our association counts many committees which work together to organise career related events, create our yearbook, plan trips abroad, provide study support to fellow students and much more. Feel free to walk into the Cover room (Bernoulliborg 0041a) where you can join in on a game, ask for help with a course or just hang out! 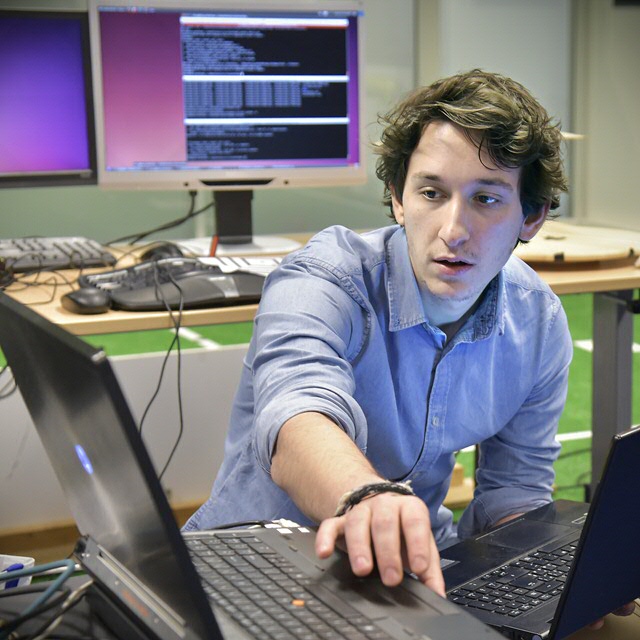 Using my knowledge in my future work

'I came to Groningen for the Master's degree in Artificial Intelligence because of the practical approach: half of the courses I followed involved practical cases, which form a big part of each course.This works perfect for me because we are given the chance to immediately test and play with all the knowledge which is handed to us. This approach boosts the learning of a subject. It is great to have the opportunity to discover and deepen the understanding of a concept thanks to a supervised project.I particularly focused my courses on robotics...
Autonomous navigation systems has always been one of my particular interests, and after the possibility to study and practice those systems in the Robolab, I'm looking forward to using my knowledge in my future work.’ After doing her master's project in the USA, Trudy wanted to continue to work on the edge of knowledge. She ended up back in Groningen for a PhD project about the transfer of cognitive skills. She builds computer models which show how humans learn new tasks and tests them by comparing them to, for example, test scores or brain activity. Using her models we can learn more about how your brain uses what you already know to learn something new.

Robots as problem-solvers in production lines

Once you have obtained your Master's degree in Artificial Intelligence, you can apply your skills in research & development, for instance air traffic and space labs, where you make sure that intelligent and innovative technologies are used during the design process. You could also choose to get a job at a research institute where you work as a researcher. This can be done at a university (PhD) or at a research institute like TNO. About 50% of our students choose a career as a scientist.
Where do graduated master AI students work at the moment? Maarten van Grachten and Mathijs Homminga did the AI master in the old doctoral program and they specialised in very different directions. Mathijs works as a software engineer at the IT-company Evermind. He programs and implements innovative IT-projects for shops. Maarten is doing a PhD in Barcelona where he investigates how a computer can compose jazz music.

For questions regarding the programme